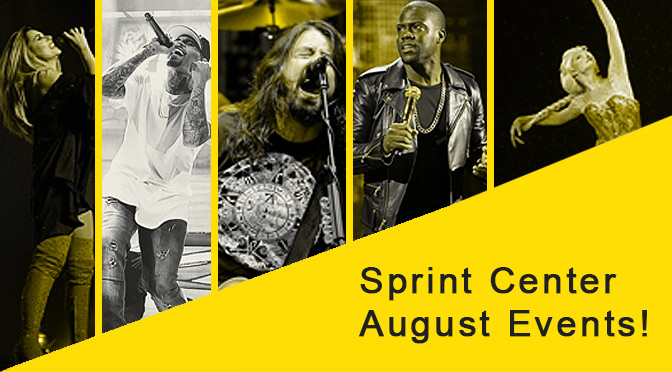 August is a busy month at Kansas City’s incredible Sprint Center arena. A perfect venue for sports, concerts, and performance art shows, the state-of-the-art facility is located across from the popular Power and Light district, and has bolstered the downtown area as an attraction for residents.

Interested in seeing an event in August? Check out what Sprint Center has scheduled to close out the summer!

Having sold more than 85 million records, Shania Twain is considered one of the all-time best-selling musical artists.

It’s been more than 11 years since she has gone on a full world-wide tour, but in March of 2015, Twain announced it was time to get on the road and support her new material, which is said to be “soul music”.

For tickets, visit Tickets For Less and get the best seats for Shania Twain’s return to the touring stage.

Chris Brown has come to be one of the more entertaining musical performers in the country over the years.

With mind-blowing dance routines, catchy beats, and a smooth singing voice to go with it, Brown is a show you won’t want to miss. Sprint Center offers great floor seats as well as incredible regular seating which puts you up close and personal with Brown and his fellow performers.

Tickets For Less has the perfect seats available for the August 12 show.

Dave Grohl and the Foo Fighters are coming to town for what will be nothing less than a spectacular performance. Grohl recently broke his leg when he fell off stage during a performance, but the injury hasn’t slowed down one of the world’s top artists.

The Foo Fighters have a catalog which spans 20 years and recently released a new album which features eight different songs recorded in eight different US cities providing their own unique inspiration and sound to each track.

Grohl and his band-mates are widely considered among the best performers alive. Expect the show to be packed to the ceiling, so get your tickets today at Tickets For Less, and don’t miss out on your chance to see an incredible rock show!

Comedian and actor Kevin Hart arrives in Kansas City on August 22 for two performances (7:00 pm and 10:30 pm) which are guaranteed to bring unlimited laughter.

Hart has become one of the more popular comics and actors over the past several years, and is one of the hardest-working performers in show business.

His energy and unique ability to tell a story with not only his words, but his actions, makes him one of the best acts out there today.

Don’t miss your chance to see Hart in person. Visits Tickets For Less for the best seats at the Sprint Center for either of his August 22 performances.

Ending the summer with Disney On Ice’s Frozen is likely the best possible way to celebrate before everyone heads back to school for the year.

One of the more popular Disney’s films in some time, Frozen captured the imagination of millions while providing a hit song, “Let It Go,” that dominated airwaves and racked up awards since its release.

The star character of the show, Olaf the snowman, as well as characters from Toy Story, Finding Nemo, and The Lion King, will dazzle with incredible dancing, special effects, and music. The performance will capture the imagination of both children and adults.

With six performances, don’t miss out on your chance to get the best seats in the house to see Disney’s incredible ice performance at Kansas City’s Sprint Center by heading to Tickets For Less.