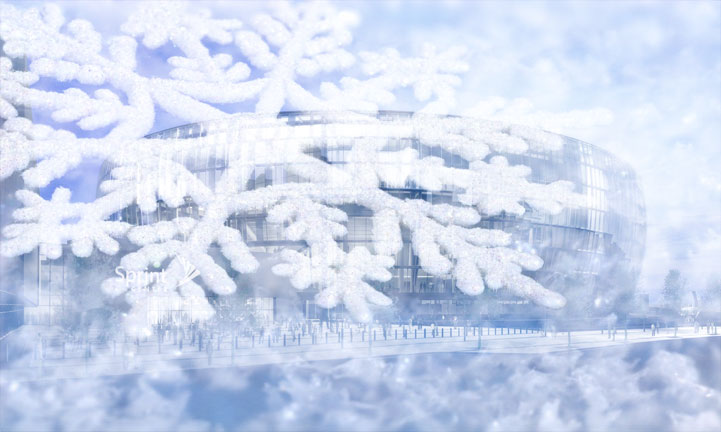 It’s the holiday season in Kansas City and the downtown Sprint Center is booked with plenty of incredible performances and shows throughout the winter. Here is a list and information on all upcoming events available to you through the winter months.

The Kansas Jayhawks will take the court at Sprint Center against the Oregon State Beavers. Each year, Bill Self and the highly ranked Jayhawks travel the short distance east to downtown Kansas City to take on a non-conference opponent. This year, the Pac 12’s Oregon State will get their shot at KU, a game between the two teams which also took place in 2012 when the Beavers came to Kansas City to play the Ben McLemore and Thomas Robinson-led Jayhawks.

The Christmas-themed progressive rock band which has existed since 1998 and sold more than 10 million albums. The highly charged christmas music performed with an incredible lights show has become one of the more incredible and impressive holiday shows in the country. Don’t miss out on your chance to see one of two performances the day after Christmas.

In an original story from the world of Marvel comics, the superheroes of the Marvel world take on evil. The story is framed around the battle over the Cosmic Cube, the source of ultimate power and one of the most feared and coveted treasures in the Marvel Universe. The Cosmic Cube has been shattered into pieces by the Mighty Thor in order to prevent it from falling into the wrong hands. As the heroes track the Cosmic Cube, they will encounter some of the most feared foes in the universe, such as Loki, Green Goblin, Doctor Octopus, Red Skull, Madame Hydra, Ellectro, and more! Multiple shows are scheduled:

Two of the most popular and successful hard rock bands come to Kansas City’s Sprint Center to put on a show for long-time fans as well as newcomers to the scene. Tool, a creative and highly successful band has made as much of an impact on current-day hard rock as any other band in history. Primus, more notable from the 90’s, was also a mainstream act in the hard rock genre.

The Harlem Globetrotters, a comedic traveling basketball team which puts on a show full of entertaining jokes and tricks, but most notable, incredible basketball skills in dribbling and passing, come to Kansas City in late January. The Globetrotters have been in existence since the 1920’s, originating in Chicago, and have put on more than 20,000 exhibitions over the years. Former Kansas Jayhawk and NBA legend, Wilt “The Stilt” Chamberlain, is among the many famous names of players who spent time with the Globetrotters.

Hosted by two live performers, Sesame Street Live “Let’s Dance!” offers an up-close, interactive experience like you’ve never experienced before! You, the audience, are invited to dance as all of your favorite Sesame Street friends join you on the floor – dancing with fans of all ages. In addition to ongoing dance parties, Elmo uses his imagination to “Do the Robot,” Cookie Monster teaches all ‘feets’ to dance, and Ernie shares the fun of dance with the Sesame Street favorite “Shake Your Head One Time.” Various times for the shows are as follows:

Tickets to all Sprint Center events are available at Tickets For Less, today! With a variety of seating options throughout Sprint Center, you can get up close and engaged in all the action this winter, and with zero hidden service fees, what you see is what you get on all ticket purchases. Don’t miss out on these great performances and shows at Kansas City’s beautiful Sprint Center.