Kansas City experienced twenty-five popular Elton John songs on October 13, 2007.  Sir Elton took the stage to open the then brand-new Sprint Center.  The event left attendees impressed with the venue–and in awe of the performer.

Now, over a decade later, the “Rocket Man” is coming back to town. On Wednesday, February 13, 2019, Elton John songs will again fill the air at Sprint Center!

While it’s impossible to guess which selections from his massive catalog will make the cut, the playlist of Elton John songs performed in 2007 may give us some idea of what’s on the horizon.

Elton John Songs from the 2007 Performance

He opened the inaugural Sprint show with Funeral for Friend/Love Lies Bleeding and followed it with The Bitch is Back and Mad Man Across the Water.

After that three-song start, it was time for one of the most popular songs from the Elton John discography.  For many, when you say Elton John, Tiny Dancer comes immediately to mind. Levon, Believe and Take Me to the Pilot were up next. Then, he launched into Goodbye Yellow Brick Road, Daniel and a quintessential piece from Elton John–Rocket Man. 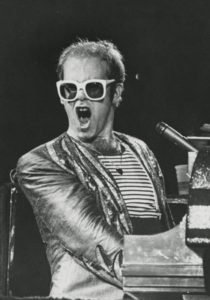 In most cases, an audience would be satisfied with a 10-song performance from a living legend.  Adding another chapter to the Elton John biography, however, the Rock ‘N’ Roll Hall-of-Famer came through with another fifteen songs!

He buzzed through Honky Cat and then changed moods with Someone Saved My Life Tonight and I Guess That’s Why They Call It the Blues.  After playing recognizable Elton John songs like Burn Down the Mission, The Bridge and Sorry Seems to be the Hardest Word, he paused before silencing the crowd with a heart-rending rendition of Candle in the Wind.

The playlist for the remainder of that show reveals that Elton provided the crowd at Sprint with a truly incomparable series of well-known hits.  Bennie and the Jets.  Philadelphia Freedom.  Sad Songs (Say So Much).  I’m Still Standing.  Crocodile Rock. Saturday Night’s Alright for Fighting.  These are the kind of Elton John songs that have made him one of the world’s most popular and recognizable performers.

He then braced the audience for show’s conclusion with Don’t Let the Sun Go Down on Me. Finally, the world-class performer concluded an unforgettable night with a song that is pure Elton John: Your Song.

The first Elton John show at Sprint wasn’t just the venue’s first concert.  It’s still remembered as one of its best!

What can fans expect in 2019 from Elton John? Age doesn’t seem to have slowed him down. His Las Vegas shows remain popular and well-reviewed. Those performances, however, tend to be shorter than what he’s historically done while on tour. Kansas City concert-goers can probably expect another wide-ranging performance on February 13, 2019.

Consider the show’s date (a day before Valentine’s Day), it wouldn’t be surprising to see an emphasis on John’s softer side and his more romantic pieces. That makes Your Song and Tiny Dancer safe bets. It may also open the door for a rendition of Can You Feel the Love Tonight, a song that was passed over in the 2007 show.

Since the 2007 show, John has released two new studio albums, creating an opportunity for Kansas City to hear some newer Elton John songs from these two records.

Regardless of the playlist assembled, we can all be certain that there will be another unforgettable night at Sprint Center.